Two teens are turning their devotion to being golf caddies into bright futures.

Sydney DeBlander of Dearborn and Eamon Moriarty of Dearborn Heights are among the 25 Michigan winners of the Chick Evans Scholarship, a four-year housing and college tuition award given to caddies across the country from the Western Golf Association.

The teens learned they’d received the honor following a final selection interview held Jan. 4 at Country Club of Detroit in Grosse Pointe Farms. Both are caddies at the Dearborn Country Club.

Both DeBlander, a senior at Cabrini High School in Allen Park, and Moriarty a senior at The University of Detroit Jesuit High School & Academy, will attend Michigan State University on the scholarships in the fall. The awards are valued at more than $100,000 over four years.

WGA directors, Evans Scholars alumni and other program supporters interviewed each of the nominees at the selection meeting.

“Each of these deserving Evans Scholars epitomizes what our program has been about since its creation in 1930,” WGA Chairman Frank Morley said. “Their dedication, hard work and sacrifice is humbling, and we are honored to be able to help them pursue their dreams.”

The news that he’d won a full college scholarship still is sinking in for Moriarty, 17.

“It’s surreal,” he said. “It feels like it’s not actually happening. Just like that I have free college and just have to pay for books.”

While Moriarty only began caddying last summer, he said his mother had the scholarship in mind for him since he was 13.

“Once I started caddying, it was a nice source of income and it didn’t have the same constraints as a normal job,” he said. “It also helps you make connections with people for the future.” 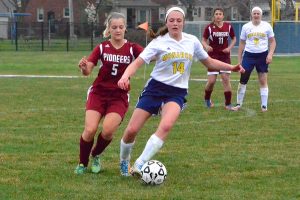 For DeBlander, a three-sport athlete at Cabrini who started caddying two years ago, the part-time job was a natural extension of her love of sports. She is a member of the high school’s basketball, cross country and soccer teams. She’s also in the Spanish Club, National Honor Society, a yearbook photographer and a Girl Scout.

“My brother started caddying and would come home with stories,” she said. “I love sports, and it sounded like something I’d get into.

“I’ve been playing sports since I could walk really. My older brother and I were outside every day, and once I was old enough to join organized sports, I started with soccer and continually added on.”

When she began caddying, she heard about the scholarship opportunity right away. “Every golfer you have ends up saying ‘You know there’s a scholarship you can apply for,’” she said. “It’s definitely pushed in the caddie program.”

While she was confident during the interview process, she said learning she’d won the full-ride college scholarship takes off a lot of pressure for her future.

“I knew I had a lot going for me, but I didn’t know what the other applicants brought to the table,” she said. “It’s definitely a relief because the reality doesn’t hit you until you’re a senior and you have the numbers in front of you. Then you’re wondering how am I supposed to afford college when I don’t even have $2,000 in my own bank account.”

DeBlander plans to major in biology at MSU and get on the premed track, which will be less burdensome with her first four years already paid.

“It’s such an amazing scholarship that i don’t think a lot of people know about,” she said.

The Western Golf Association, headquartered in Golf, Ill., has supported the Chick Evans Scholarship Program through the Evans Scholars Foundation since 1930.

Currently, 965 caddies are enrolled in 19 universities across the nation as Evans Scholars, and more than 10,600 caddies have graduated as Evans Scholars since the program was founded by famed Chicago amateur golfer Charles “Chick” Evans Jr.

“These young men and women have worked tirelessly to earn this life-changing opportunity,” WGA President and CEO John Kaczkowski said. “They have shown excellence in the classroom and in their communities, as well as on the golf course.”

Scholarship funds come mostly from contributions by 33,000 golfers across the country, who are members of the Evans Scholars Par Club program. Evans Scholars alumni donate more than $10 million annually, and all proceeds from the BMW Championship, the third of four PGA TOUR Playoff events in the PGA TOUR’s FedExCup competition, are donated to the Evans Scholars Foundation.